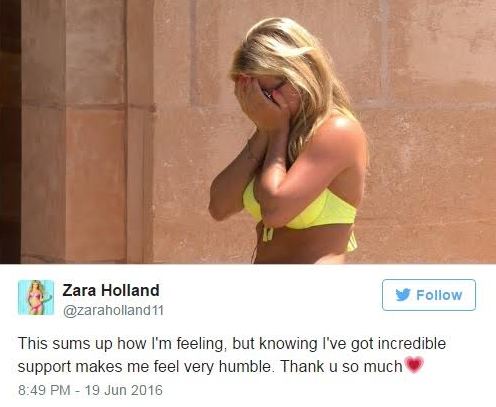 Zara Holland, former Miss Great Britain winner, took to her Twitter handle to announce her sadness at leaving the dating program after hearing of her mother's illness, days after she lost her Miss GB crown for having sex with a housemate.

In a statement, published by Mirror UK, she said: "I'm so sad to leave the villa but it's important for me to get home and spend time with my mum while she gets better.

"I've had the time of my life on Love Island and would like to thank all of my fellow Islanders and the production team for all their support."

ITV added: "Our thoughts are with her and her family and we send all of our best wishes

After being told of the news of her crown being taken from her, off-camera, Zara returned to the villa in a fluster of emotion. She burst into tears before calling everyone to hear her cry.

“I need to speak to everyone. I’ve just had some news. They’ve taken my title off me. They’ve done a statement and stuff just saying ‘it’s not acceptable.”

“I did Miss Great Britain because I wanted to. It’s something I wanted to do.

"And if you put that hard work in and the commitment and the time and the effort…I did and I won, and I worked so hard.

"And now I just made one silly, stupid mistake of being in the moment has ruined everything. I can’t even put into words how gutted I am. So if they want to give me it back that’s fine!”

Vowing to put the news behind her, Zara declared: “I just feel like people are going to judge me. I guess it’s just been a bit of a rollercoaster in here and now this has happened.

"I want to carry on as normal. But anyhow, onwards and upwards.”