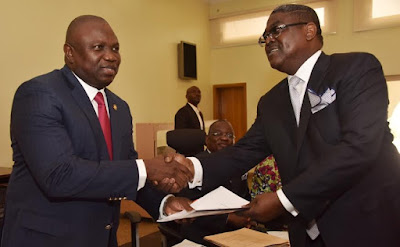 In what is set to become a major milestone achievement in its 50 years of existence, the Lagos State Government on Wednesday signed a Memorandum of Understanding (MoU) to kick-start the construction of the 38km 4th Mainland Bridge, expected to bring a 14-year old dream to reality. The Bridge, which is geared towards economic growth in the State, is expected to gulp N844billion in a Public Private Partnership (PPP) initiative and would be delivered in three years.

Speaking at the signing of the MoU held at the Banquet Hall, Lagos House, Ikeja, State Governor, Mr. Akinwunmi Ambode, said that the need for the bridge had become imperative following the phenomenal growth of the State with a population of over 21 million people, which has in turn increased commercial activities and traffic gridlock.

“This has made it imperative for us to have a 4th Mainland Bridge that will serve as an alternative route to the Eastern axis and decongest traffic in the State.

“More importantly this bridge will provide the required transportation compliment to the rapidly growing industrial activities on the Eti-Osa - Lekki - Epe corridor of the State,” he said.

The Governor said the alignment will also cross through the Itoikin road and the Ikorodu - Sagamu Road to connect Isawo inward Lagos Ibadan Expressway at Ojodu Berger axis.

He said the Bridge would be made up of eight interchanges to facilitate effective interconnectivity between different parts of the State.

“This structure will be a Four-lane dual carriageway with each comprising three lanes and two metres hard shoulder on each side. The bridge will be constructed to have a generous median to allow for both future carriageway expansion and light rail facility. There is no gainsaying the fact that huge benefits will be derived from this project but most importantly, make life more comfortable for Lagosians,” he said.

According to Governor Ambode, the Bridge which would be a PPP initiative is a testimony to the confidence the partners in the project have in the State Government and the Nigerian economy in general.

Expressing confidence that the project would be delivered on a Win-Win framework for all investors, the Governor said for the first time in the history of the State, the Government was embarking on the construction of a long-span bridge and expressway without Federal funding as the project is to be solely funded by the private sector.

“I am delighted that this project which has been on the drawing board for quite some time is now set to become a reality. This again, is the Continuity with improvement which we promised Lagosians.

“We have started the process with the signing of this MOU which is an expression of the commitment of major stakeholders including the government and the consortium of consultants and investors to the delivery of the project within the scheduled time frame,” the Governor said.

Governor Ambode also reassured Lagosians that his administration would remain committed to improving the State with world class transportation system as a vital component, which according to him is a key requirement for the sustenance of economic growth in the State.

The Bridge, among others would accommodate cyclists and pedestrians and feature two service areas as well as additional pedestrian crossing.

The Bridge would also accommodate three Toll Plazas which are still being tested from financial point of view and it would serve as a major boost to the actualisation of the Lekki Master Plan.

The project is to be financed by Africa Finance Corporation, Access Bank and other private investors who have already signified intention to be part of the construction, while Visible Assets Limited would be the coordinating firm.

In his remarks, Executive Chairman of Visible Assets Limited, Mr. Idowu Iluyomade, said the project would go a long way to reduce traffic gridlock in the State and would provide job opportunities for Lagosians.

He said aside improving the quality of life of the people, the Bridge would also be a big asset that would be handed to the Lagos State Government at the end of the concession, assuring that it would be delivered on schedule.

Earlier, Commissioner for Works and Infrastructure, Engr. Ganiyu Johnson said that the Bridge when completed would utilise state-of-the-art tolling system that will ensure free flow of traffic.
Photos from the MOU signing 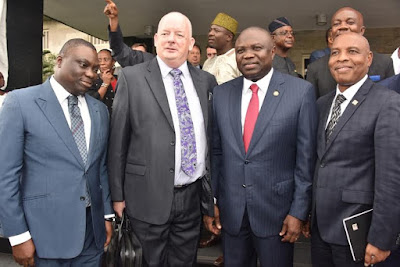 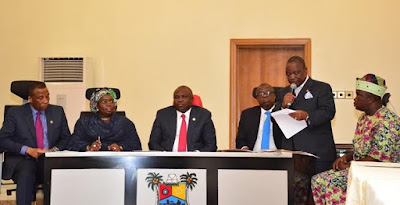