China 'overtakes U.S. as the the world's largest economy': IMF says economy is now worth £11 trillion as America falls into second place for the first time since 1872 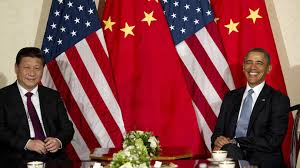 China has toppled America to become the biggest economy in the world, according to figures from the International Monetary Fund.
The US has been the global leader since it overtook Britain in 1872, but has now lost its status as top dog.
The latest IMF figures show the Chinese economy is worth £11trillion compared with £10.8trillion for the US.
China – whose wealth has accelerated in recent decades amid rapid industrialisation – is expected to extend its lead, with the IMF estimating its economy will be worth £16.7trillion in 2019. That would be 20 per cent bigger than the US economy, which is forecast to be worth £13.8trillion by then.
The numbers are based on ‘purchasing power parity’ (PPP) which makes adjustments for the fact that goods are cheaper in countries such as China relative to the US.
Without these adjustments for living costs, the Chinese economy is still smaller than that of the US, at £6.4trillion.
But experts have described the toppling of America after nearly 150 years by China – even on the PPP measure – as a ‘symbolic’ moment for the global economy.
China enjoyed three decades of double-digit growth before the global downturn, as industrialisation and sweeping economic reforms created a new powerhouse in the East.
Growth has slowed in recent years but remains strong by Western standards with the IMF forecasting expansion of 7.4 per cent this year and 7.1 per cent in 2015.
By HUGO DUNCAN FOR THE DAILY MAIL