'Why I hacked my lawyer father to death' - Student 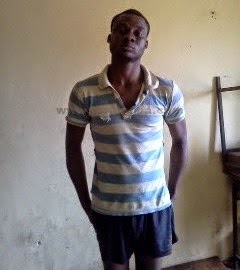 Tolani Ajayi, the 21year old Redeemer University student who hacked his father to death on Tuesday July 3rd (read here), has finally spoken to reporters about what led him to kill his own dad. Speaking to journalists today at the Eleweran Police Headquarters, Abeokuta, Tolani said he attacked his father after he (the father) beat him with a stick, which he said made him very angry.

"There is no way Nigerians can help me. I am going to face my judgement. I am meant to pay for what I have done. It is not as if I am ready, it is something that is inevitable - something that is going to happen; I am just waiting for it.


The incident happened around 1 a.m. when the church would have been sleeping by then. It was anger that led me to this. There was an argument between us and I stood up to him. He beat me with a stick and bit me with his teeth repeatedly. Just the two of us were at home; my mother was in Abuja,” he said. Continue...


According to Premium Times, when asked if he was under the influence of any drugs when he attacked his father, Tolani admitted taking drugs but denied he was on drugs on the day of the murder, saying it was more spiritual.

He also said it was not planned. He said his father was the one that first went to the kitchen to get a wooden spoon which he used to hit him. Tolani then went into the kitchen, took a knife and cutlass and attacked his father.

“I tried to defend myself, then he bit me on my shoulder and I got angry. I used normal small kitchen knife then I used a cutlass to attack him. I regret the action,”

"My mother is still grieving. I have sent some people to talk to her that I am sorry. I want to give her time. I have talked to my sister. I have asked for forgiveness,” he said.

Tolani said that his family resides in Abuja while he lived at the Redeemed Church, RCCG, camp.

“My father came for a programme; then, my school was on break so I went to meet him. We were meant to go back to Abuja together then the incident happened and I am here,” he said.

Premium Times reports that Tolani was into drugs and had been caught twice by the authorities of Redeemer University. The school had set up a panel to question him on the alleged drug offence before he killed his father.
culled from linda ikeji