Sudanese woman gets death sentence for marrying a Christian man 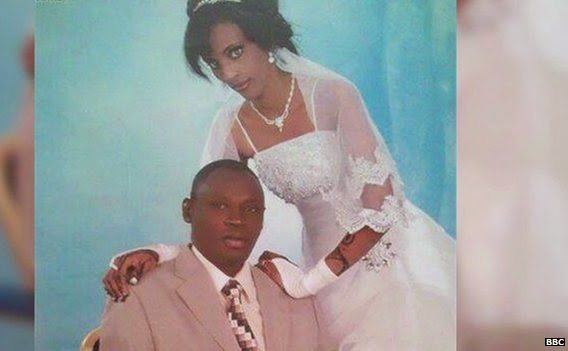 Pregnant 27 year old Sudanese woman, Mariam Yahia Ibrahim Ishag has been sentenced to death by hanging by a Sudanese court for apostasy, (that is, renouncing ones faith or religion) after marrying a Christian man
Mariam, whose father is Muslim but raised orthodox Christian by her mother, was earlier sentenced to death by hanging on Sunday May 11th but was given till today May 15th to have a rethink and convert back to Islam before the verdict would be enforced. However during a court appearance today, Mariam maintained that she's a Christian and there's no going back.

"We gave you three days to recant but you insist on not returning to Islam. I sentence you to be hanged to death." Judge Abbas Mohammed Al-Khalifa told the woman in court today, AFP reports  Continue...

“I am a Christian and I never committed apostasy,” she said in court.

Defending the judgement of the Sudanese judge, Ahmed Bilal Osman, Sudan's information Minister, said such judgement is not only delivered in Sudan but also in other Islamic countries

"It's not only Sudan. In Saudi Arabia, in all the Muslim countries, it is not allowed at all for a Muslim to change his/her religion." he told AFP

The death sentence will reportedly be carried out after Ibrahim gives birth.
by linda ikeji