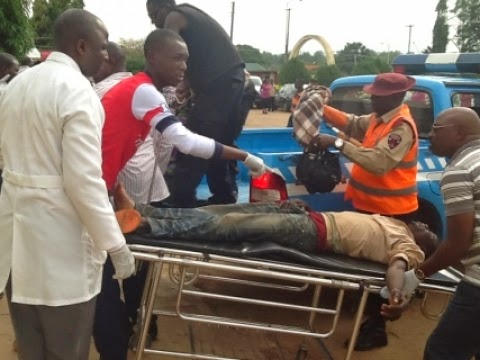 Over 118 people died in the commercial hub city in jos yesterday.The President has released a press statement condemning the bomb blast that occurred yesterday afternoon at Terminus market in Jos.Here is the press statement signed by his spokesman reuben abati

President Goodluck Ebele Jonathan strongly condemns the bomb blasts in Jos, Plateau state, today, describing the perpetrators of this tragic assault on human freedom as cruel and evil.  He has also directed all relevant agencies to mobilise support and relief efforts in aid of the victims. The President extends his heartfelt sympathies to the affected families and persons.

President Jonathan assures all Nigerians that government remains fully committed to winning the war against terror, and this administration will not be cowed by the atrocities of enemies of human progress and civilization. Continue...

President Jonathan has also expressed Nigeria’s deepest appreciation to the international community on the success of the recent Summit in Paris on the security situation in Nigeria hosted by the President of France, H.E. Francois Hollande.
He reaffirms Nigeria’s commitment to the implementation of the resolutions reached by the Summit, in addition to existing measures already being taken by the administration to combat terrorism and ensure the safety of lives.
President Jonathan states that the Federal Government of Nigeria is prepared to strengthen existing mechanisms to ensure the immediate implementation of the resolutions of The Summit, among which are: