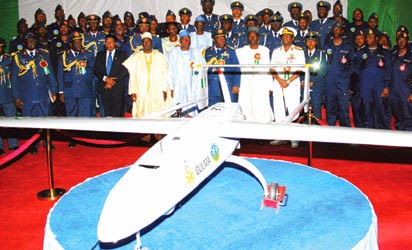 Vanguard reports that Tsur Dvir, a Marketing Officer for Aeronautics Defense Systems, a firm based south of Tel Aviv, that supplied Nigeria with Aerostar unmanned aerial vehicles, said yesterday that to the best of their knowledge, the drones are not operational.

"To the best of our knowledge, these systems are not operational. They (drones) are probably parked in a yard somewhere".

He said lack of maintenance have reduced their operational effectiveness and made them obsolete.  Tsur said they received a letter of inquiry for maintenance on the drones from the Nigerian govt but it was never followed through

"We did receive an inquiry from them about spare parts, but it never turned into a deal. I wish it had.” he said.

Aerospace industry experts say each drone cost between $15 million and $17 million.
The multi-billion naira drones purchased by the Nigerian Government in 2006 for the surveillance of petroleum pipelines in the Niger Delta that might have been used by the military in the search for the missing Chibok girls are said to be obsolete due to lack of maintenance & use since they were bought
Meanwhile, Nigeria unveiled a locally-made drone at an Air Force base in Kaduna in December last year, although it has not flown since.