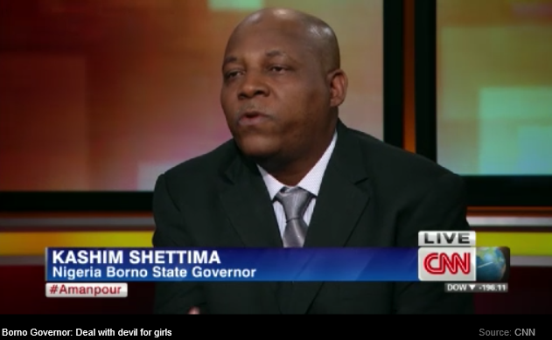 The Governor of Borno state, Kashim Shettima has asked President Jonathan to negotiate with Boko Haram men if that is what it will take to release the abducted Chibok girls. Governor Shettima made this remark during an interview with CNN's Christiane Amanpour last night.

"The issue of not negotiation with the terrorists – it’s out of the question. If it means talking to the devil, it means the devil can come down, we can get back our girls. The group that kidnapped the girls are a bunch of raving lunatics.

"Do we have any other option? If I have to talk to the devil to secure the release of the girls, I will do so. President Jonathan did not act on time and did not talk to me over the kidnappings until 19 days after.’’

He also said for the first three weeks after the girls were abducted, the whole thing was politicized.
Also speaking, a woman leader of the All Progressive Party Sharon Ikeazor said the situation could have been salvaged on time if the President had acted immediately. She said the girls had their cellphones with them and had contacted their parents about their abduction
source: linda ikeji