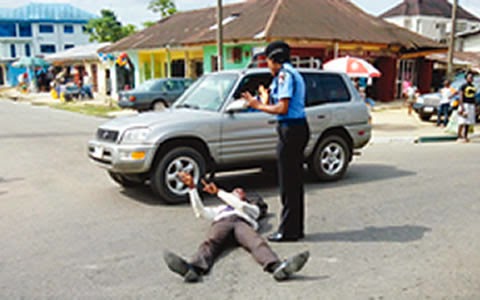 Sunday Omotayo, an unemployed graduate of Mechanical Engineering from Ekiti State University attempted to kill himself yesterday in Akwa Ibom Staate due to frustration, Punch Reports.

Omotayo who had gone to Akwa Ibom state to seek employment hoping that his services as a trained mechanical engineer would be needed having heard of the infrastructural development happening in the state, was greatly disappointed as he was not absorbed by any company in the state.

Frustrated by his inability to secure a job in the last ten years since he graduated from the university, Omotayo yesterday morning went to the Akwa Ibom State Prison Services asking prison officials to shoot him dead or put him in prison where he could rot and die. Continue...


A prison official who craved anonymity said when Omotayo came into the prison premises looking well dressed with a tie on, he ran towards them asking that they shoot him that he is tired of living. The prison officers who immediately cocked their gun, listened more to what he was saying.


"The next thing he said was ‘shoot me, shoot me, I want to die, I am tired of this world’ The prison official said.

Omotayo was later overpowered by the police, who counseled him and forced him into a bus heading towards the Ibom Plaza roundabout.

While in a speeding bus, Omotayo did the unthinkable. He deliberately jumped out of the bus along Wellington Bassey Way, Uyo, Akwa Ibom State capital, expecting to be crushed to death by other vehicles. According to sources on the street which was close to the State Government house, it took a while for policemen to get him out of the road. He insisted that he must put an end to his poverty-stricken life by committing suicide.

In an interview with Punch later, Omotayo said "There is no state that I have not gone to in search of a job in the past 10 years. I came to Akwa Ibom because this is my last hope because of the stories of Governor Godswill Akpabio and his uncommon transformation. I came with the hope that with what is going on in the state, getting a job would be easy so that I can begin to be a man. But since I came, I discovered that many people from Akwa Ibom are also crying because of poverty and joblessness"
source:linda ikeji