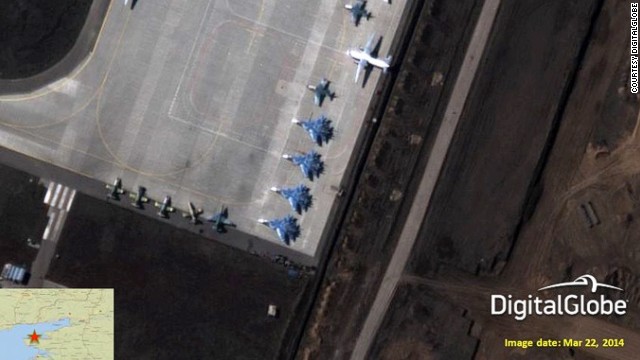 NATO has released satellite photos that show the extent of Russia's military mobilization on its border with Ukraine -- including fighter jets, tanks, artillery and thousands of soldiers who are prepared to invade within 12 hours if called upon, say officials.


The photos appear to confirm Western leaders' fears that Russia may be preparing for a ground invasion of eastern Ukraine, despite NATO's call for Russia to withdraw its forces from the border.
What do the photos show?
The photos, which private satellite imaging firm DigitalGlobe says it took between March 22 and April 2, purportedly reveal dozens of Russian "fast jets," helicopters and infantry units that were not spotted in photos of the same areas last year.


NATO estimates there are up to 40,000 troops massed at various locations along the Ukrainian border, and says it has spotted Russian forces at more than 100 different sites.
The photos of military equipment and infantry personnel should be greater cause for concern than the ones of the fighter jets, according to experts who have examined the photos for CNN.
The photos of tanks, artillery battalions, and infantry brigades near Novocherkassk -- just 50 kilometers from the Ukrainian border -- show Russia's preparation for a potential invasion, says Igor Sutyagin, a research fellow for Russian studies at RUSI, a defense and security think tank.
By Nick Thompson, CNN