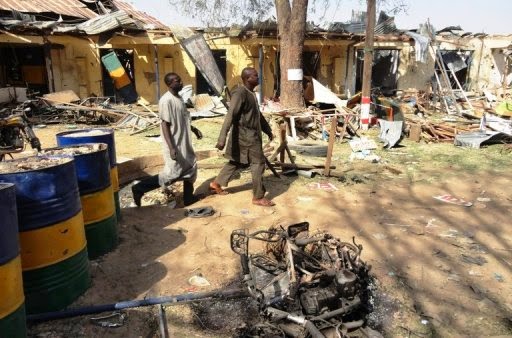 Boko Haram members yesterday April 9th bombed a police station, a bank and a Sharia Court in Gwaram Sabuwa, Gwaram LGA of Jigawa State killing at least 4 policemen, one civilian, with quite a number of others sustaining various degrees of injury.

According to eye witnesses, the men, who were about 20 in number and came in motorcycles and other vehicles, operated from 1am to 2am unhindered. They later told the villagers that they would be back again if they continue sending their children to school, operating football viewing centres and  accepting polio vaccines. Continue...

The  Assistant Inspector General of Police,  Zone 1,  Mr. Tambari Muhammed confirmed the incident and said more policemen have been drafted to the village.
Meanwhile the Boko Haram men also attacked Shadna, a village in Bosso  LGA of Niger State last night when the villagers were having their monthly cultural dance meeting. Two people were killed while three persons sustained injuries and were transported to the hospital for medical attention.
by lindaikeji