Suarez sets record for goals scored in a month 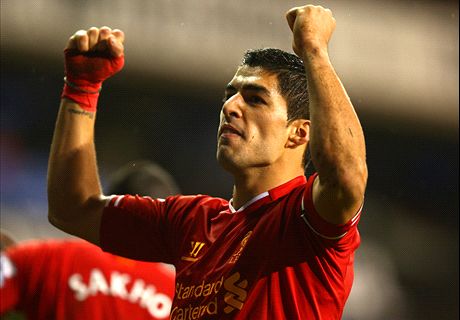 Luis Suarez's brace sent Liverpool top of the Barclays Premier League with a 3-1 win over Cardiff City at Anfield.
The Liverpool striker, who signed a new long-term deal on Friday, made it 10 goals in four games. Suarez put Liverpool in front with a volley from outside the area after 25 minutes and then turned provider for Raheem Sterling three minutes before the interval. There was enough time for Suarez to grab a third, his 29th Barclays Premier League goal of the calendar year, before the break to put Liverpool firmly in control.
Cardiff showed fight in the second half, with Jordon Mutch reducing the deficit just before the hour, but it was not enough as their winless away run in the top flight was extended to six matches.
Liverpool manager Brendan Rodgers made no changes from the side who beat Tottenham Hotspur 5-0 on Sunday. Suarez retained the captaincy after scoring eight goals in his previous three matches. The visitors made just one change from their 1-0 success over West Bromwich Albion, with Aron Gunnarsson replacing Fraizer Campbell, who dropped to the bench.
Suarez was first to threaten with a shot that clipped David Marshall's side netting after two minutes as the hosts applied early pressure. Craig Noone had Cardiff's first effort, forcing a save from Simon Mignolet following a quick counter after 16 minutes.
Suarez broke Cardiff's resolve when he produced a superb volleyed finish to Jordan Henderson's cross, capping off a magnificent team goal. Liverpool came close to doubling their advantage seven minutes before the interval when John Flanagan almost turned a Glen Johnson cross past Marshall from a tight angle.
Sterling added the second with his third goal in four games, tapping Suarez's pass into an open net, before the Uruguay forward again struck to complete his brace. After a neat backheel from Henderson, Suarez curled an effort past Marshall and into the right-hand corner of the net for his 19th goal of the season.
After a low-key start to the second half, Mutch pulled a goal back for the visitors, heading home unmarked from Guy Whittingham's delivery after 58 minutes. It ended a run of 498 minutes without an away Barclays Premier League goal for Cardiff, who were much improved after the interval.
But a comeback never looked likely and Suarez was only denied a hat-trick by the width of a post as the hosts climbed to the summit.


Liverpool manager Brendan Rodgers: “He [Suarez] s doing his job to a really high level. He's doing it consistently, week-in, week-out. For me he's this in-built brain for football. His view of game is different to others and he has an anticipation of where ball is going to drop."
"The team was outstanding today. In the first half some of our football was exceptional. The chances that we are creating we are putting away. We could have scored five in the first half.
"Since January we've been exceptional. People will talk us up and people will talk us down - it is irrelevant to us."
Cardiff City manager Malky Mackay: “I told the players how proud I was of them. We were excellent until Luis Suarez showed why he is about the best player in the world right now. I told them not to go under and we stayed in the game. Liverpool will be challenging for the league this year.”
source:premierleague.com