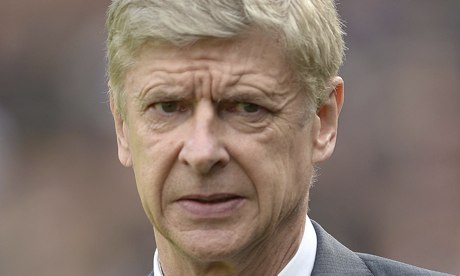 The Gunners moved back to the top of the table by beating West Ham 3-1 at Upton Park on Boxing Day, having gone behind at the start of the second half before Theo Walcott's double salvo and Lukas Podolski's crisp strike put the visitors back on course.

There is, though, little time for Wenger's squad to revel in their lofty position as the hectic festive schedule continues at St James' Park on Sunday against a team fast closing in on the top four following the 5-1
win over of Stoke which was a seventh victory in nine Premier League games.
"Newcastle are in full confidence, they are doing well and won again on Boxing Day with a big score," said Wenger. "Loic Remy is a very good striker, very quick and makes very good runs, so we have to keep him quiet. That will all be another test, but our team wants to do well, the character is great and our concentration is top."
Arsenal will be without Wales midfielder Aaron Ramsey for the rest of the festive matches, possibly even the third-round FA Cup date with Tottenham on January 4, after he limped off at Upton Park with a thigh problem.
Ramsey is due to undergo a scan and Wenger will be hoping that does not reveal a muscle tear which could keep the Wales international out for a longer period.
Wenger, though, does have some options, with Podolski back from a four-month hamstring injury lay-off, while Czech playmaker Tomas Rosicky was left out completely on Boxing Day and England international Jack Wilshere is back from his two-game ban.
"We have a very short time to prepare, but maybe we can rotate a little bit as well," said Wenger. "I rested (Santi) Cazorla for a few games and you could see against West Ham he had an outstanding game and what a difference that makes when the player is fresh.


"I rested (Tomas) Rosicky, (Jack) Wilshere will come back from suspension, so we will have two more options.
"We have (defender) Laurent Koscienly who can maybe come back as well, maybe who is fresh as well."
Rosicky feels the Arsenal squad will again be ready to raise their game against the Toon Army.
"Obviously it will be a tough game, but Newcastle will always give you a good match," he said. "It will be very interesting, I love these kind of games, so I am very much looking forward to playing them."
Walcott is another Arsenal player to have recently returned from an enforced lay-off. The England forward, whose abdominal problem needed minor surgery, chalked up his second brace in three appearances, and Rosicky believes the 24-year-old brings a different dimension to the Arsenal frontline.
"The goalscoring threat is the main thing with Theo. You can see he is a very good finisher," Rosicky said. "Since I joined Arsenal - Theo came six months earlier than me - I have seen him grow from let's say the kid when he arrived.
"You could see that he would be good finisher [then], which is what he is showing now. He is a real threat in the box, has got an eye for the goal so it is very good to have him back because you never have enough guys like that."
source: theguardian.com