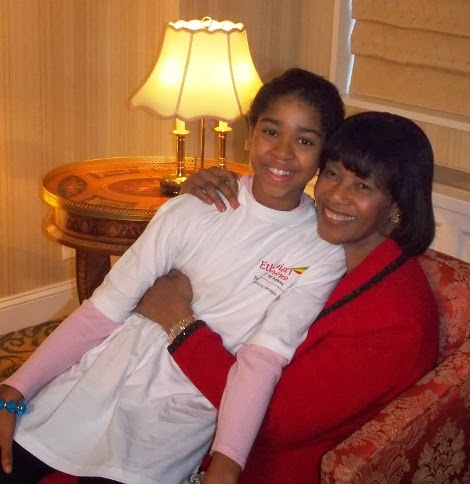 The remarkable 11 year old Nigerian girl has been named one of the most influential young people in Africa. (Zuriel Oduwole pictured above with Jamaican Prime Minister - Portia Simpson Miller)

Her journey began about a year and a half ago, when this relatively quiet and unknown young ‘pre-teen’ girl, proudly Nigerian, but a true Pan-African child with parents from both Nigeria and Mauritius, began with a simple mission – to show the rest of the world that African leaders are capable of solving their own problems, such as managing a successful economic and social turnaround. Continue... 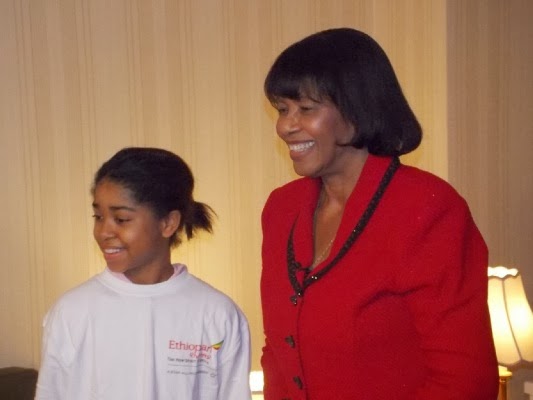 She was 9 years old back then, when she embarked on this mission, first to interview the enigmatic President Jerry [John] Rawlings of Ghana for her school assignment on documenting a successful revolution anywhere in the world, on film format. In the process of her research, she found out about the challenges of Girl education and the obstacles to girl child development, in Africa. She then followed this trend on global news program, specifically on BBC.

Her mission immediately changed. She made it a cause to learn more about the challenges of the Girl Child in Africa, but also try to find a simple solution, one as understood by a 9 year old.
By age 10, she had focused more on meeting with and talking to African political and business leaders about the need to fight for educating the African Girl child, which she saw as an investment in Africa. She asked them for a commitment in their respective countries to doing more to change the perception of Girls education,in some cases from an afterthought, to a primary focus.

She was subsequently interviewed for a full feature by Forbes Magazine making her the youngest person in the world to be accorded this privilege, in recognition of her accomplishments. By age 11, she had been received in formal audience with [9] African Presidents and heads of state, all of whom are still in office today. This is an amazing feat by any measure, considering the work and effort it takes to schedule such meetings across Africa’s multi-lingual international language barriers of English, Portuguese, and French. She has also unfortunately fallen into the category of those who miss high profile meetings, in this instance apre-arrangedinterview with a current African President, but for good reason; - because of conflicting schedules with her school work.
Zuriel’smany interviews in front of her camera covers varying subjects andissues of education, health, and even the Millennium Development goals, on which shemade the subject of a documentary.  Her interviewees have included the Presidents ofkey African economies such as Kenya, Nigeria and Tanzania, as well as those of South Sudan, Liberia, Cape Verde and Malawi.

Recently in October this year, she was invited to Tanzania, and bestowed with an honorary Ambassador title for the largest foundation in East Africa by the First Lady, Mrs. Salma Kikwete. This was in recognition of her advocacy work for the Girl child. A new computer Lab in the country’s oldest school was also dedicated,opened, and named after Zuriel during her visit.

In between, she stopped by the annual Clinton Global Initiative in New York last September, and also had a one-on-one interview with America’s most celebrated civil rights leader – Reverend Jesse Jackson. On the side of the September 2013 UN General Assembly, she met with and interviewed the head of the Danish Delegation, to find out how DANIDA [Denmark’s overseas development unit] impacts and helps women and girls, across Africa.

Despite all these great strides, Zuriel Oduwole,who has been featured in international news broadcasts, graced the cover of national magazines, andmade several international and regional publication features, has kept her sights firmly on continuing to do [2] simple things that seem to define her immediate goal. These are making the case for educating and inspiring the African Girl child through her Dream Up, Speak Up, Stand Up program, now launched in Nigeria, Malawi and Tanzania. The second isshowing the world the positive things about Africa, through her compelling ‘world class and award winning documentaries’, [some featuring her interviews with Africa’s leaders], which she writes, directs, and co-produces. Essentially, she is RebrandingAfrica.
The Caribbean Region – Her Next Stop
She has now turned her focus away from African leaders towards the America’s, at least momentarily, while keeping Girls Inspirationissues central in subject. Zuriel has just met with the leader of the largest island country in the Caribbean and the only female head of governmentin the CARICOM region, Prime Minister Portia Simpson Millerof Jamaica. The Prime Ministerin an intimate and detailed interview was dazzled by Zuriel’s questions, impressed by her poise, and so overwhelmed by her ability to focus on issuesat such high level that she herself broke with protocol. ‘She hugged, kissed, prayed for, and then carried her on the lap’ for the formal photograph before the press, after the interview.
“She is our brilliant child from Africa”, she declared!
Issues discussed during the interview covered the emerging dominance of Jamaica in World athletics, including the phenomenon known as “Lightning Bolt” [Usain Bolt], the Girl Child in Jamaica, Tourism in the country, and the Prime Minsters role in encouraging Girls within the fifteen country Caribbean Community [CARICOM] region to aim for higher leadership positions. While she plans to meet with Usain Bolt in a future interview schedule, there are already confirmed meetings and interviews, with other Prime Ministers, in the Caribbean region.
They want to tell their stories of growth & development intimately and exclusively, through Zuriel.


It all makes this remarkable young Nigerianarguably the most powerful and influential 11 year old in the world today, and sheis African. She just might be building her way to accomplishing her long term dream of becoming the President of the greatest union in the world – the United States of America, just as another African has done currently. Soperhaps, she can help Africa and the Caribbean region even further, as she has so eloquently puts it in her many interviews.
by linda ikeji