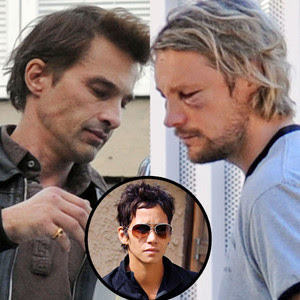 The next day, Gabriel says he took Nahla to Halle's at around 10 AM.  He says in a completely unusual move, Olivier came out of the front door -- usually the nanny was the go-between.  Gabriel claims Olivier said, "We need to talk." Gabriel says he walked toward his car to close his door when Olivier jumped off the stairs and knocked Gabriel to the ground and started brutally beating him, screaming that Gabriel cost them $3 million to fight the custody war (Halle's failed move to take Nahla to Paris).
Gabriel says Olivier took his head in his hand and slammed it on the concrete driveway.
According to the declaration, as Olivier assaulted Gabriel he screamed that they were going to move to Paris and Gabriel had better move there too or Olivier would kill him.
Gabriel claims Olivier then said, "We called the cops," and that when they show up, "you're going to tell them that you're the one who attacked me, or I'm going to kill you."
Law enforcement sources tell TMZ ... Gabriel made no mention of the alleged threats when he spoke to police immediately after the fight.

Gabriel alleges in his declaration that Halle lost her bid to get primary custody with the judge consistently siding with Gabriel for a 50/50 arrangement.
Gabriel's lawyer attached photos of his injuries which are brutal. Sources on Halle's side claim it was Gabriel who flew off the handle and started the fight.
by linda ikeji