Ogechukwu Godwin & Chuka Make It to the Top 10 on Nigeria’s Got Talent! View Photos & Videos from the Ninth Episode 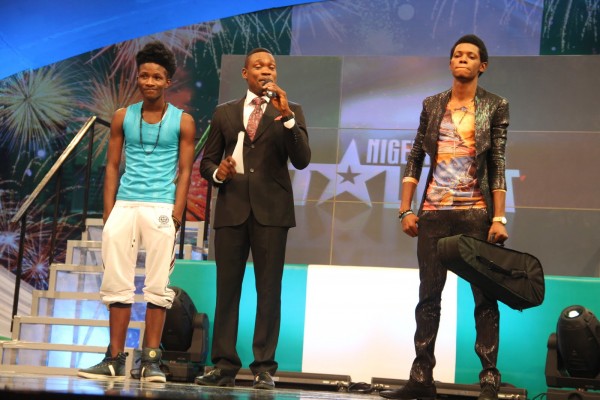 It gets more exciting, as two contestants, Chuka and Ogechukwu Godwin, last week joined Mr. Bariyu and Impulsein the final stage of the popular franchise show.
Twenty year old Ogechukwu Godwin was the viewer’s choice, and this automatically qualified him to join the finalist train. However, following the show’s format, the judges had to pick between who had the second and third highest votes- The Lord’s Chosen Dancers and Chuka.
While Yibo and Kate chose Chuka, Dan insisted that he would have loved to go with The Lord’s Chosen Dancers, but it wouldn’t change anything.
With Chuka and Ogechukwu joining the finalists, the heat is definitely on as the final performance night on December 9 gets closer and closer, and as the weeks go by, ten contestants come in every week to slug it out for a position in the final stage.
This week, Vodavillz dance group, Asuquo Romeo (Mono Cyclist juggler), Azuka Ekazue (Singer), Toke Salami (Singer), The Pebbles (Dance group), Gabriel Ayankojo, Obetem Nkami Deborah, Xpendables and Blessing Christopher performed in front of the judges. “Only two people from this group will make it to the final stage”, says Adaora Mbelu, Project Manager.
Sixteen semi-finalists with the lowest public votes have been eliminated from the contest and as the show gets hotter, the curiosity has reached high points. Who will be the winner?
Voting closes by midnight on Tuesday, so viewers are expected to send their favorite character’s short code to 33685.
By BellaNaija.com