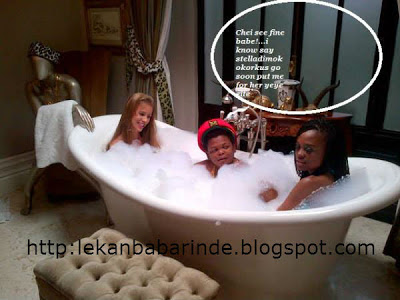 Nigerian movie superstar actor, Osita Iheme popular known as Pawpaw is no doubt flying high in his acting career.
Aside doing well on the silver screens, the pint-sized actor is getting endorsements from all corners as many organisations and individuals want to do business with him.
Just recently, the one half of ‘Aki and Pawpaw’ fame landed an 11million naira deal in South Africa. Soon after, Pawpaw got himself entangled, as seen in this picture, with two ladies in a bathtub unclothed.
Before you corrupt your mind, this picture is not a photoshop but a photoshoot of a commercial the actor shot for VUZU entertainment TV, which landed him the 11million naira deal in South Africa.
As the face of the TV station and part of his deal, Pawpaw had to shoot this commercial for the TV channel. Pint-sized man doing great things for himself. A lesson for others to learn from.
culled from naij