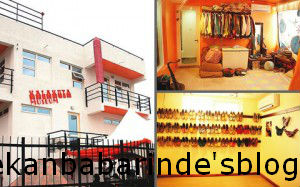 The Lagos State Government has turned the house of the late Afrobeat legend, Fela Kuti, into a museum to “promote cultural heritage and mark the 74th birthday” of the legendary musician.
Inside the museum located at 8, Gbemisola Street, Allen Avenue, Ikeja, to be and managed by Total Consult, are Fela’s trademark items like dresses, shoes and household materials.
The dresses are about 3,000.
Others include covers of the albums of the late musician.
Images on the album covers bear a variety of styles and typefaces which echo and comment on the works and politics of the artiste.
According to the state Commissioner for Tourism and Inter-Government Relations, Mr. Disun Holloway, the Kalakuta Republic Museum is to bring back the old social life and culture to Lagos.
He noted that it was impossible to overstate the importance of Fela to Lagos and the global musical village.
He said, “It is only appropriate to have chosen a day as this to declare this monument open today to mark the 74th posthumous birthday of the legendary musician. It is also the beginning of Felabration – a weeklong series of festivities to celebrate a Nigerian multi-instrumentalist musician, human activist, tourism stakeholder and political maverick.
“This is a deliberate attempt at bringing the old social life back to Lagos through the creation of places of relaxation within safe and secure environment. As demonstrated by the involvement of the state government in this museum, it is pertinent to reiterate our commitment towards boosting tourism.”
Speaking on behalf of the family, Femi, son of late Fela Kuti, hailed the state government for its support.
He, however, said the museum would only serve its value if the legacies his father fought for were brought to the reality.
He urged government at all levels to rise and foster equality and eradicate poverty in the country.
He added, “We say a big ‘Thank You’ to the Lagos State government. We are not one that supports any government but ensure that all is well for the citizens. I sincerely commend Governor Fashola who has stood out to be recognised with this.
“This would serve as a step forward if the cause my father fought for is achieved. The issues of poverty, electricity, education and many other vital ones aimed at making the nation a pillar for envy. Our children should be able to see the vision of pan-africanism through the struggle of my father. When we eradicate poverty and our value increases, then we can say we have value and reason to celebrate our coming generations.”
A former Minister of Planning, Chief Rasaheed Gbadamosi, was a friend of Fela, described the museum as ‘a memory brought alive’.
He said Fela was a true definition of democracy and an icon for equality.
He said, “This brings a lot of memory. It replaces the bad moment when we lost Fela. It clearly shows that while we lost Fela, his remains should always give us hope that goodness will return.”
Also, the curator of the museum, Mr. Lemi Gharioku, said the museum was a deserved one as it would preserve the legacy of the icon.
He added, “More can be done to celebrate the hero who demonstrated persistency despite all odds and threats. Fela has been recognised internationally, and is worth to be celebrated in his state and country where he fought for liberation, transparency and equality of all people.”
Also at the event were Fela’s other children that include Yeni and Seun; and founder of Evergreen Music, Mr. Femi Esho.
culled from punch