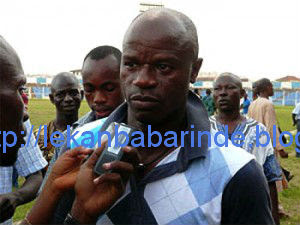 Former Super Eagles player, Mutiu Adepoju who after his playing days decided to work with the shooting Stars sport club of Ibadan as their General Manager resigned from his position yesterday.
The 1994 African Nations Cup winner dropped a resignation letter at the club’s office yesterday and according to information reaching us, Mutiu will be leaving the sores of Nigeria for Spain on Thursday where he will be attending a two-week UEFA Pro Licence course which according to him is to re-validate the licence.
It can be said that the former Eagles player during his time of service to 3SC brought the Ibadan-based club back to the Premier league from their relegation and the club had maintained this position up until the Headmaster left the club yesterday.
We hear that Mutiu Adepoju was not happy with the treatment given him by the board of the club after he asked to re-apply for a new contract after the initial contract had expired and according to him it was a move by the board to pass down their message that his services were no longer required by the board and rather than be ridiculed, he decided to take the bull by the horn.
by channels television