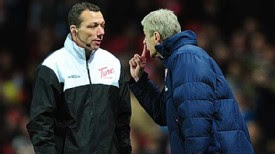 Arsenal manager Arsene Wenger was left frustrated with his side after seeing them lose to Wigan at home on Monday.

The Gunners succumbed to a 2-0 deficit after just eight minutes, a disadvantage that proved insurmountable over the remainder of the game - with Thomas Vermaelen's first half strike ultimately not proving the start of an expected comeback.

Wenger blamed a combination of a lack of hunger and fatigue for the disappointing performance and result.

"I concede that we were not at our best tonight, but it still seems harsh to lose the game like that," Wenger told Sky Sports. "In the second half I felt we lost condition, and we didn't have enough productivity.

"We lost our sharpness and they defended well. I felt in the first half they shouldn't have the lead - but in the second half we did not create much because we didn't have the motivation."

Wenger dismissed suggestions that Roberto Martinez's tactical system was the difference between the two sides.

"Not at all," Wenger said. "We had a lot of the ball but I feel intermittently we were not sharp tonight. But there system did not have much importance."

Mikel Arteta was forced to limp off with an injury midway throughout the match, and Wenger was pessimistic about its seriousness.

"It looks very bad, but I don't know [if it is season-ending]," he noted. "He had to come off. It's an ankle problem. It looks quite a serious one.

"We have to scan it tomorrow, it's too early to say tonight. But it doesn't look like a little ankle sprain. It is a serious one."